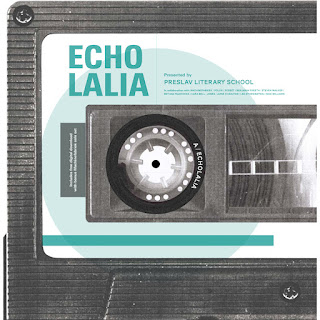 Recalling the sounds of Faust, Popol Vuh, Throbbing Gristle, The Skaters and Broadcast the album draws on the energy of other decades and scenes as diverse as US underground noise, German krautrock and French musique concrète. At times melodic and blissful, at others dark and cut-up, the album seems to move beyond its constituent parts and methodology to reach something haunting and engaging. The album was mixed and mastered as it was played live, with no extra overdubs, by the cult Berlin dubstep producer Lord Cry Cry (Blunt Force Trauma).

The vinyl, whose packaging is based on vintage cassette design features commissioned artwork from Supanaught and photography from Marion Auburtin with a free digital download of all material, plus a bonus, exclusive Machinefabriek solo tape set from the same performance.

"Like William Basinski's Disintegration Loops, Preslav Literary School focuses on creating something new and personal out of found sounds and dull, everyday happenings... wonder and amazement is conveyed through the sounds and a sense of otherworldly significance is given to the simplest of actions." (Sputnik Music)

2. Machinefabriek (Rutger Zuydervelt) is one of the most exciting, diverse and prolific artists working in experimental music today. With over 100 multi-format releases in the last five years for labels such as Type Records, Lampse, Digitalis, Staalplaat (Mort Aux Vaches) and 12K, his resonant work has amassed a dedicated audience all over the world. [http://www.machinefabriek.nu/]

"His work nestles tantalising between genres, counterbalancing immersive swathes of ambient sound with astringent textural challenges and offsetting a predominantly electronic mode of production with an emotionally-charged smattering of found sounds and naked instrumentation." (The Wire)

3. Since visual artist and experimental musician Poldr (Benjamin Laurent Aman) relocated from France to Berlin, he has become one of the rising stars of the capital's established underground scene, marking himself out as a performer who deals with texture, frequency and field recordings with a distinct and unafraid ear. Founder of the cult Razzle Dazzle label, Benjamin is also one half of the French/US improv-duo Crystal Plumage. [http://www.benjaminlaurentaman.com/]

"Drawing equally from a contemporary droned madness and a hypnotizing minimalism.... A dense and harrowing musical experience." (Tomentosa Records)

4. Newcastle-upon-Tyne's Posset redefines cassette-based music for a new century. Freely releasing CD-Rs and tapes of sonic experiments, magnetic interruption and dislocated environmental recordings, Posset filters everything through a C60 haze that transforms the listening experience into something fragile and compelling. [http://www.myspace.com/iamposset]

5. Jamie Charlton is interested in all areas of sound manipulation but has a particular interest in analogue sound. His experiments with four-track tape recorders and cassette manipulation attempt to remove sounds from their original contexts and turn them into something different. Recently, he has been collecting field-recordings of everyday things and juxtaposing these sounds with instrumentation. [ www.myspace.com/jamiecharlton]

7. Bethan Maddocks is a Visual Artist who creates kenetic installations involving sculpture and illustration. She supports her practice delivering art workshops and has worked as an artist assistant to Hew Locke and Alec Finlay. Bethan is involved in the Newcastle based theatre and arts collective ‘Holiday Romance’ and at present is undertaking a furniture-making apprenticeship. She is currently working on a series of drawn and projected ‘Body maps’ to be exhibited in 2011.]

8. Nick Williams completed a BA in Music and the Creative Arts with Performance Technology in 2001 and is currently researching electronic music in cross-disciplinary performance for his PhD at Newcastle University. Nick has been co-director of the interdisciplinary performance group theybreakinpieces since its formation in 2004. [ www.virb.com/njw]

9. Lee Etherington is head honcho of NO-FI, an organisation he helped found in 2001, initially as a local promoter but now more a tour booker, event producer and label. He was until 2005 one half of Posset, but 3 kids and work eat up his time these days. So it's with relish that Lee dived into the Echolalia workshop and live performance.

10. Cara Bell-Jones is a curator and producer of workshops, exhibitions and arts festivals. Based in Berlin, she's heavily involved with the capital's free and open source scene for Free Culture Incubator and transmediale festival for digital culture. She also works for Maison D'Ailleurs, a gallery in Switzerland.

11. Steven Walker is an artist, consultant and designer. He is also the commercial director of ESAV (Empty Shop Audio Visual), the AV resource and alternative education programme of lectures, workshops and events in Durham.

Echolalia was supported by the National Lottery through Arts Council England.

Physical and digital editions available in the shop.