The Echolalia 12" vinyl out on NO-FI (feat. Machinefabriek, Posset, Poldr & more) has been getting some very kind press, described as "a very exciting release for anyone with a penchant for tape aesthetics... a heated, shimmering masterpiece" (Geiger), "a fascinating body of work... intriguing, seductive and musical" (Ampersand Etcetera), as managing "to be intellectually and emotionally engaging in a way that no other record has for me this year" (Cows Are Just Food), a "f**king amazing tape loop record!" (Second Layer) and as "one of the craziest things I've heard in ages and yet completely compelling" (Norman Records). 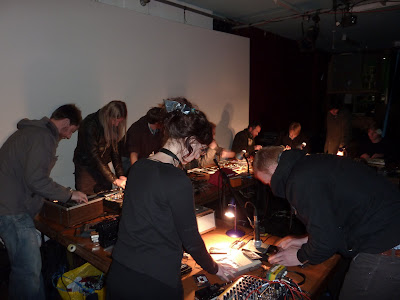 Trying to talk about the performance as a whole is hard because they jump genres every half second and use anything & everything as source material. So, obviously, this is rad as hell. There’s squawky electronics, bird chatter, synth patterns, squeaky balloons, hidden arias, ancient TV/radio broadcasts, high pressure crackle & hum, typewriter windchimes, indecipherable voicemail recordings, vacuum cleaners, and tape hiss galore. And that’s just a fraction of the sound sources, which get warped, twisted, rewound, slowed, shifted, and glitched in every way possible. They take tape manipulation to places I never thought of, ambient doom, grooved psych, gauzy pink bliss, debased spaced journeys, all with the help of impeccably juxtaposed random shit. Echolalia is about as crazy & erratic as a record can get while still being fucking fantastic, exceedingly listenable, and coherent.

The Wire's Nick Cain wasn't so keen, but the magazine was still kind enough to invite me to London to play an exclusive set live on Resonance FM for their Adventures In Modern Music show which you can stream/download at their site.
Head straight over to NO-FI to buy the limited edition deluxe, screenprinted vinyl with liner notes, photograph, essays and more for a low, low price (with free shipping).

Physical and digital editions available in the shop.